When I got back from Korea in 2012, okay that was five years ago now, I was leaning towards Speech Therapy but had no idea how difficult it would be. Thankfully, I got into the SLP program at UBC and studied from 2013-2015.

Then, after a great experience working in schools from Fall 2015 – Spring 2017, I am now aiming to move fully into private practice in the coming years. So I have started my private practice Langley Speech and Language and am hoping to build up clients over the summer and be working full time by the fall. You can email about SLP support at langleyspeechandlanguage@yahoo.com or visit the website at langleyspeechandlanguage.com

I also want to work abroad on a volunteer or paid basis, and am a member of the ASHA group SIG 17 for Global SLP initiatives. I had my first taste of that this spring working with teachers of deaf students in a restricted access country in Asia, as well as volunteering at a school in the Philippines. Email me at michaeljohnwitten@gmail.com if you have leads onto upcoming projects in SLP for education or therapy. 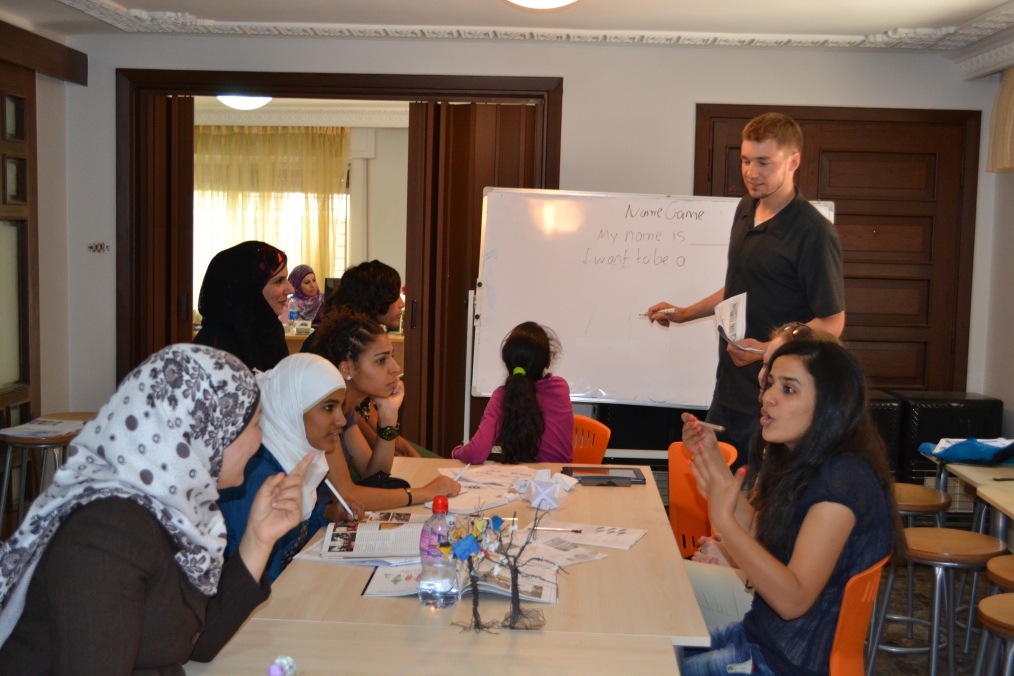 So my time in Korea is finally finished. Here is a link to a new blog that my brother Derek and I are making while we are in Jordan. Check it out!! 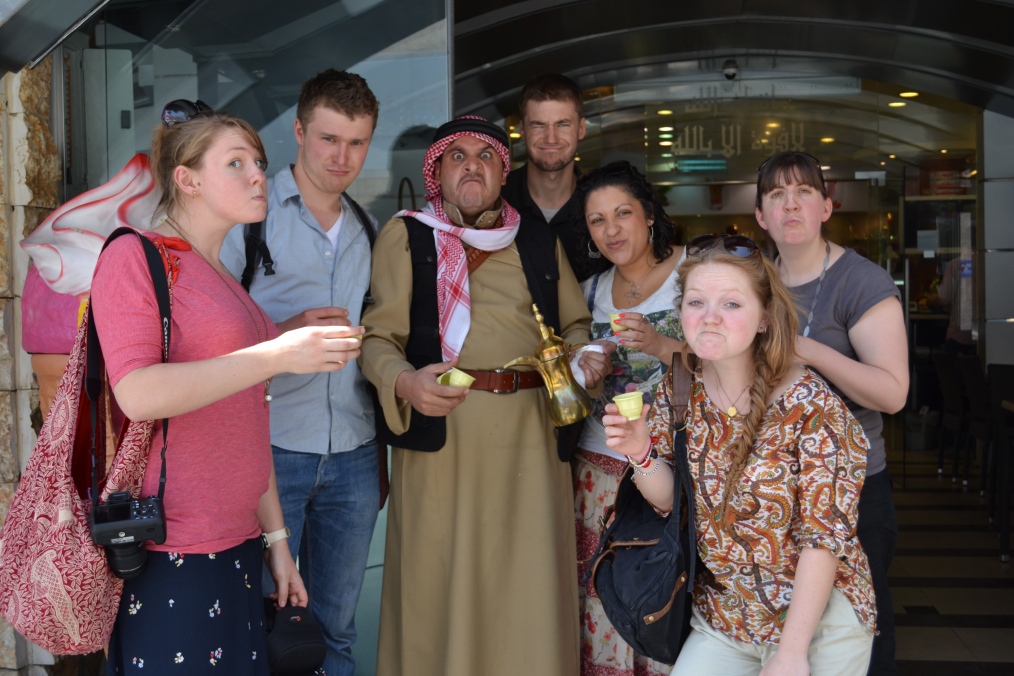 Four more of my favorite goodbye letters from the students in my last month. Some of them wrote about things they want me to remember about Korea. Some wrote in Korean to try to encourage me to continue studying Korean, and others found opportunity to let out some 8 year old angst.

1. I liked this one because she actually wrote in perfect formal Korean. After seeing thousands of grammar errors in English all year, it reminds me that they are not languageslobs. Also they sometimes try to speak in casual Korean to me even though I usually catch it. Its very clear writing and no slang, so I can read almost all of it. Just what is 과연이결 and 열정으로? If anyone cares to translate.

2. Random foods of Korea that I am not supposed to forget. “The ribs.” Pretty funny. 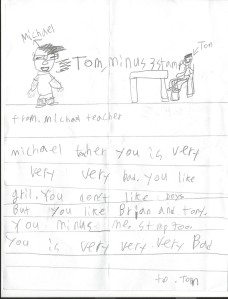 3.Tom is actually a pretty fun student, but a couple classes ago he started complaining that I only like the girls in his class.  It really cracked me up. Actually, he kind of has a point. The girls are angels in that class, and the boys are all whiners like him.

“From. Michael Teacher
Michael teacher you is very very very bad. You like gril(girls). You don’t like boys. But you like Brian and Tony. You minus me stamp too. You is very very Bad.
To. Tom”

“What a delicious and spicy kimchi”

Teacher, I Can’t Miss You

Students writing goodbyes to me. Each in their own way.

Note, I didn’t teach her writing.

“Thanks to teach me.I can’t miss you”
-Julie

One of my favorite students ever with this one:

“I see you. You is handsome”

Some people don’t even need to use words like “goodbye”

There’s a special place in Korea in an inconspicuous corner of the Coex Mall, which is called the Kimchi Field Museum. Inside, you can discover the history ingredients, and benefits of kimchi, as well as sample 8 different varieties. Moveover, there is a unique photo opportunity which I first encountered in 2007 with the welcoming and generous, “Kimchi Lady.”

Later that summer, my brother Derek and his friend Charlie made that same unforgettable pilgrimage.

Five years later, in their inaugural visit to Korea, I ushered my parents to this same revered site. Although they actually showed some indifference about visiting the museum, before walking out the door they had confessed their liking for kimchi and paused for their moment with the kimchi lady. As you can see, in the past five years she got a new pink hanbok. Also, her hand and chopsticks had been replaced and were now covered in glue, because apparently not everyone respects kimchi like the Wittens.

Test of Korean or Western Identity

So let’s see if this works. I’ve been trying it on my students, who have sometimes been quite fascinated. But anyways,  this test applies to people with a somewhat mixed cultural identity.  Many of my Korean friends were either born in North America, lived in North America for a few years, or spent a lot time studying English. That results in a somewhat mixed identity. Potentially it gives a person two different lenses in which to see the world. But what is their true identity? Perhaps they don’t even know. Similarly for expats

like myself, we begin to study Korean language and pick up Korean mannerisms and customs. Are we gradually getting more Koreanized, resulting in cultural “bifocals.” But what is our strongest focus?

Anyways, instead of trying to quantify Koreanness or Westerness with mere numbers. (i.e. 2.4 generation Korean-American, expat for 4 years, etc) This test will (ideally) just reveal directly your Koreannessor Westernness. (or if you don’t see anything, perhaps I need to tweak my test a little bit yet). Perhaps you will see right through the test I have devised, in which case the test is not subtle enough yet, or you are truly bi-cultural. 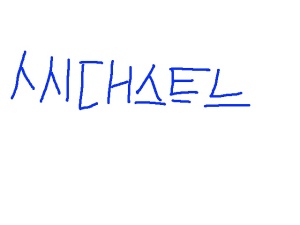 Okay, here is another one that I think has a clearer meaning in both languages. Anyone able to see it both ways? 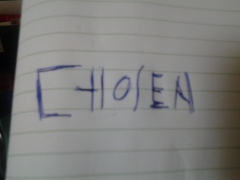 So I’m trying to get into the habit of writing something here every week while I’m still in Korea, and I’m going start with 줄넘기 (jump rope).

I found out that even in a seemingly uncommon sport like jump rope, some people are completely amazing and probably invested their life into it.

Mix of pity and admiration for him right??

I decided that since I haven’t been doing any team sports in Korea, I should start exercising more. And now that I have invested like $4 in a skipping rope, I guess I am committed. I tried four times now, and  its kind of cool because my timing was a lot better today, and I can do that thing where you cross your arms while swinging, and also swing the rope around twice in one jump. Impressed??

My ESL students vehemently told me those tricks are easy and they would like to show me up when they have a chance. Apparently Korean students jump rope all the time at school and at home, and they they can do triple jumps even, although I doubt that.

One 9 year old student excitedly told me: “Me jumprope 100 every morning, because I want to skinny.”

Haven’t written here in so long, so I’m just going to start posting some pictures or short posts hopefully. Only 3.5 months left in Korea, and winter is letting up, so time for more adventures.

Starting with the almost live octopus (straight from the water onto the frying pan). It goes down smoothly. No tentacles latching on to esophagus. Quite delicious. But I’m going to get a video next time to show you. 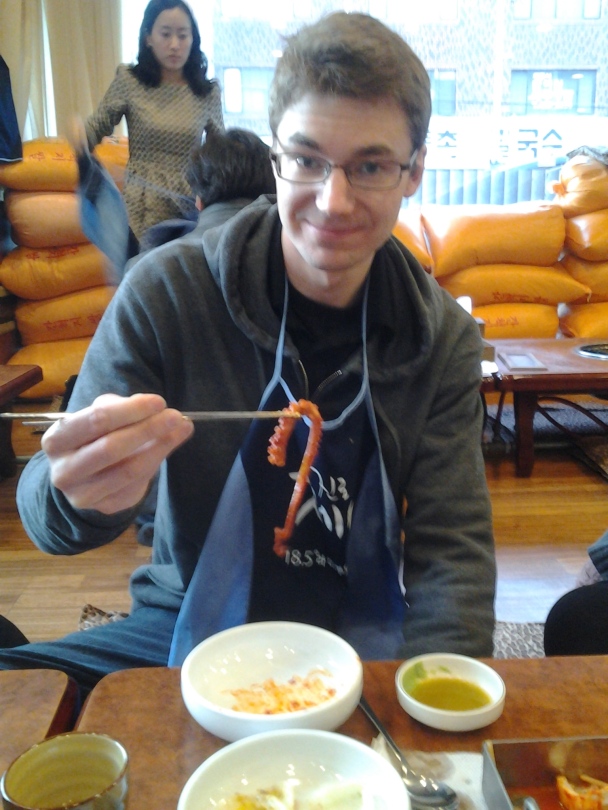 As I mentioned before, I was taking Korean classes at Dankook University here in Suji, Korea. At the end we had a speech contest, so I hope you will enjoy watching my submission if you click on the youtube link.

By the way, I added some subtitles so you can follow along a number of different ways. First, If you are a Korean or have learned 한글 you can see the actual Korean script. Second if you are learning Korean or want to get a glimpse of how different Korean grammar is, you can see the word-for-word translation. Third, there is a romanization of what I’m saying in Korean. And fourth there is a natural English equivalent, which is similar to how I originally wrote up the speech.

There’s also a slideshow that accompanied the speech, but I haven’t figured out if I can add pictures to the video yet, so currently you can’t really see the slides that go with the speech.

I have to thank some Korean friends that helped me with some editing and pronunciation. But still, I’m curious about what parts might sound natural or not to native Korean speakers? And what does it sound like to non-Korean speakers too?